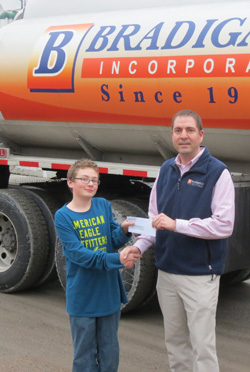 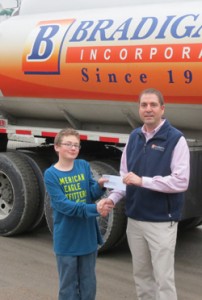 A week ago, 12-year old Colin Kline was worried that his friend wouldn’t have any gifts for Christmas.

December 18, Colin’s friend Zander and his family were victims of a house fire on North Water Street in Kittanning that destroyed most of their belongings and Christmas gifts.

Colin’s father Earl, 2nd Assistant Chief at Hose Co. #1 and employee at Bradigan’s Incorporated was so proud of his son when he took one of his firefighter boots on his bus to collect donations for the family in need.

Colin’s goodwill spread to Bradigan’s Inc. Operations Manager Andy Bradigan and other employees. The act of kindness was announced at Bradigan’s annual Christmas party and $230.00 was collected, but the giving didn’t stop there. Andy and Paul announced that the company would match that amount making the total $460.00. Colin collected about $50.00 on the bus meaning the Reher family had more than $500.00 to celebrate Christmas with.

“It was just a small way for the company to support Colin and his efforts to raise money for this family.” Andy continued to say, ” This time of year it is all about giving back, and for a 12-year old to want to do this is very, very special, and a great thing he’s doing.”